When it comes to calf-rearing, some people are consistent high-achievers; Lucy Watson is among them. Her approach is uncompromisingly focused on nutrition and underpinned by excellent management. Her calves are more than just a sight to behold – they are superb specimen and leave the rest behind.

After deciding to join her husband Chris into farming, Lucy Watson embraced the challenge of working up the ladder to achieve their goal of sharemilking. Starting with little more than unbridled enthusiasm and youthful energy, she spent countless hours relief milking and rearing calves while raising their daughter and completing the National Diploma in Agri Business Management in a mere nine months.
The immense discipline paid off and soon rewarded them with sharemilking opportunities (first 650 cows then 1350 cows). Before long, they left the South Island with their own herd to take up sharemilking on a 150 ha farm near Levin.
They’re now in their third season sharemilking 650 cows but already made their mark in their first season when they beat the farm’s best ever results for milk solids by more than 20%. Needless to say, their production success raised the odd eyebrow. “We had heifers producing 450 kg milksolids/cow, and some even did 550kg,” says Lucy.
What’s her secret? “It’s simple”, she responds. “You can’t take feed shortcuts when it comes to calf-rearing. It’s all about nutrition and good management. What you put in is what you get out.”
As long-time SealesWinslow customers, the Watsons know they can trust the quality of their feed. “There’s no substitute for it … It plays a huge role in achieving our results,” says Lucy.
She runs a tight operation and has developed a precise methodology for how calves are handled, how they’re fed, off-loaded etc. Her 200-odd calves get taught to drink the first day, they stay in a well-appointed pen for two to three days and are marked with dots to identify how well they develop. “They start with muesli, then 20% pellets and 16% pellets,” she explains. They also eat hay early on to promote a well-developed rumen. Lucy puts a lot of extra effort into later born calves to make sure they get the best start in life. They often stay longer in the pen to ensure they catch up with their older peers.
Once the calves are ready to be moved onto the run-off block, they graduate to a blended feed that is made especially for the Watsons. It reflects their weight gain objectives, addresses specific mineral needs and follows advice from their vet and their nutritionist. “Our cows never lack in anything,” Lucy says with pride. They are healthy, heavy and incredibly chilled out which she also puts down to the feed.
All up, she couldn’t be happier with her regime, not least because the calves love the feed and they transition readily onto pellets later on.
Has Lucy ever thought of changing to another product? She laughs because she’s been talked into trying something else on the odd occasion. However, she says it invariably ended in disappointment – pellets were too crumbly, too floury and plain unpalatable for her calves.
It has only strengthened her resolve that feed is not an area where you compromise – even in a tight payout scenario. “There are ways of saving money, but compromising on feed quality is the wrong way to go about it.”
A careful “first-cross” mating plan rounds off what is a finely-tuned operation based on Friesian/Jersey cross-breeds. “We try to breed effective animals with optimal milk production capability when compared to their feed requirement,” explains Lucy. They aim for animals with an average liveweight of 480kg producing one kg /kg liveweight.
If past performance is anything to go by, this sharemilking duo will continue to reach their goals and likely even exceed them. 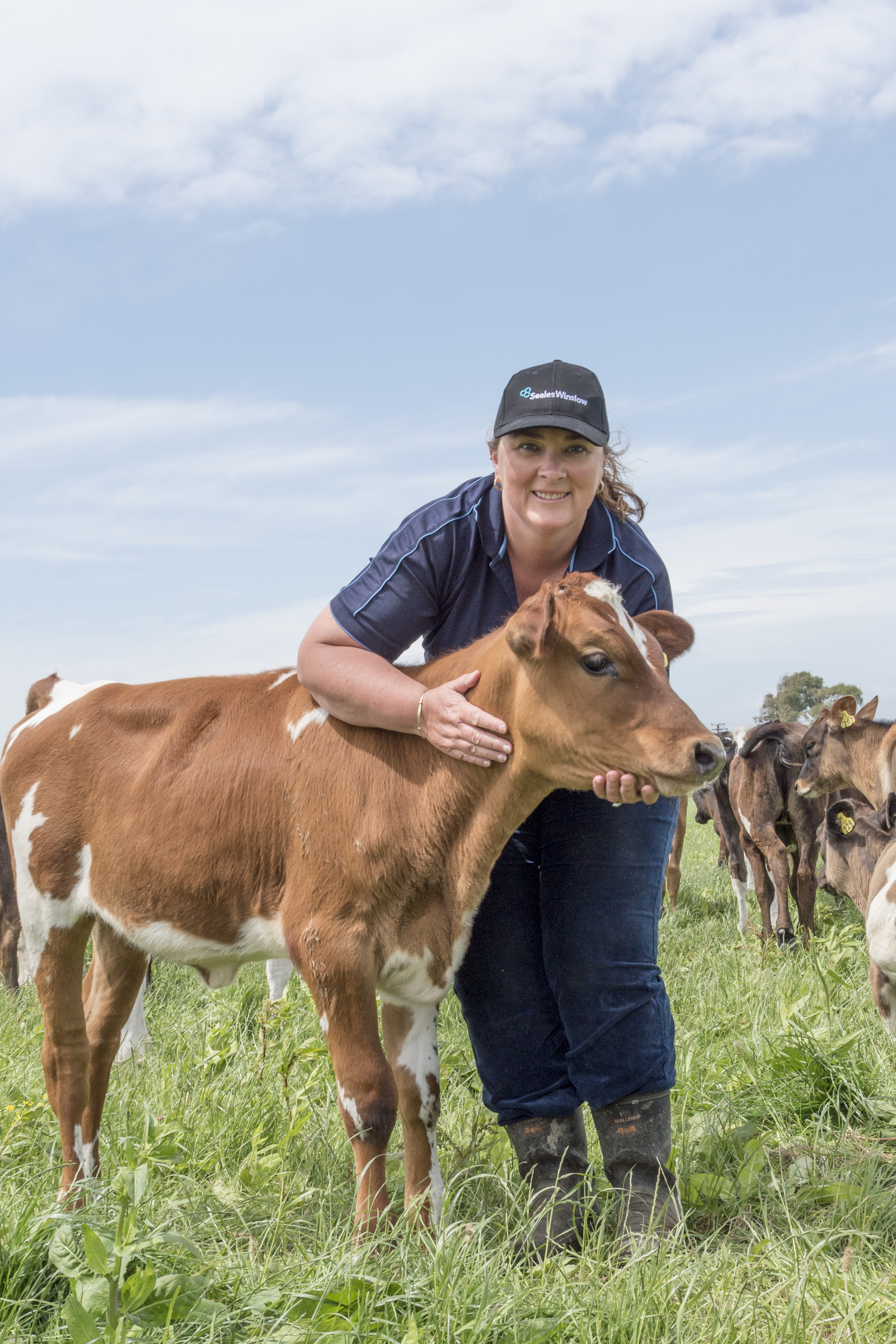 "It's simple, " Lucy says. "You can't take feed shortcuts when it comes to calf-rearing. It's all about nutrition and good management. What you put in is what you get out."